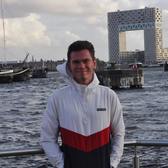 Hey everyone, welcome to Dynamically Typed #60. Two weeks after we were ice skating on the canals, sp